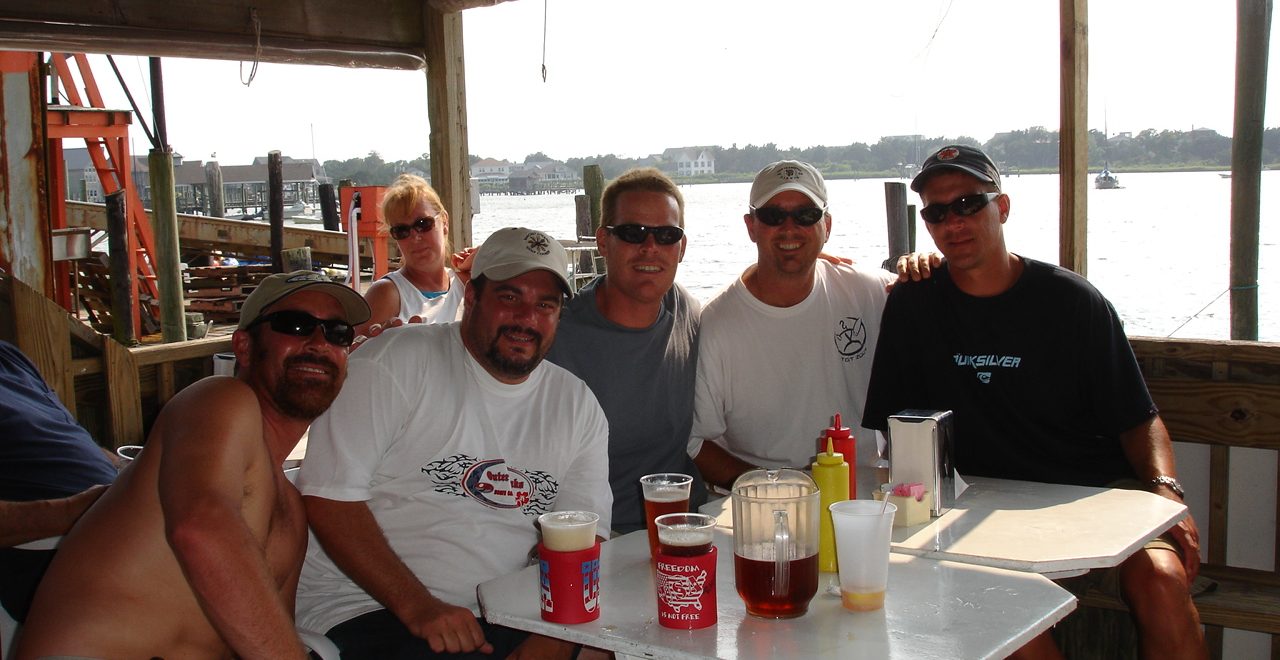 What an awesome trip, the surf sucked, but was of course a blast. But the cool thing about South/North Carolina was the culture. Fried chicken, sweetea, grits, Mr. Bojangles, Waffle House and the southern buffets. The people were different in many ways, not better or worse, just different.
We started in Atlanta to see family, then off to Orangeburg to meet Danny. We soon struck off to the coast. Thanks to Eric Neumann, we were able to actually stay on base at Camp Legune. We saw and heard the huge Howitzers, the new Osprey planes running drills at night as well as tanks and soldiers all around. The actual lodging was….. a trailer. I can still hear Joe say, “A TRAILER! I FLEW OUT HERE TO STAY IN A *&^%^*$* TRAILER!” It wasn’t that bad, but what was equally funny was Neumann trying to make it sound so much better than it was.
There was extreme heat and humidity, poker, beer, and an awesome road trip to the outer banks. We took a ferry to Ocracoke, NC where Black Bear the pirate met his ultimate fate. We were introduced to the east coast lighthouses and the hurricane torn banks. Cool stuff.
Here are the pics…..
For more pics, click here.

Joe gettin’ ready to rip on the Freaky Teaky.

The crew in Ocracoke at the Jolly Roger (minus Randy who is takin’ the pic).

Olson waking up at Neumann’s house after a night of fun.

Needless to say, this was not a big surf trip in terms of wave size or quality. Now I know that the east coast can get pretty hairy, but we had no such luck. As far as surfing goes, we messed around with beach break off of Camp Legune in South Carolina for a few days, then headed up to Cape Hatteras in North Carolina via the Ferry system. This took some time, something like 6 hours just to get up there between the driving and boating. In fact, for the entire trip, we logged in ~1,450 miles on the rented truck in 6 days.
Here are the pics. They are ALL at Hatteras along the beach just north of the point.
For more pics, click here.
Cape Hatteras
Bobbie

Learn More Get Merch Get Connected