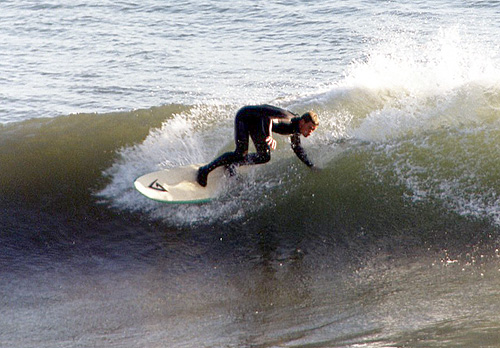 I’ve been to Quatro three or four times. Each time it’s the same…. 3-4′ and a little mushy. Kind of a Steamer’s Lane setup. Good fun, but frankly, not worth the painful 4+ hour drive, especially when there are so many great waves north of Ensenada! For some reason, Quatro is legendary. EVERYONE seems to go, so it must be good. Maybe when it gets heavy.

We did drive up the coast from San Thomas. We passed ship wrecks, which was teeny, but a cool spot. back then, the ship was huge and right in the line up. All in all, a modest trip for surf size and quality. But you know what they say. The worst day surfing……

Good fun. This is back in the day where if Jagger had a wave, you gave it to him, no questions. Jagger is cutting back into Gibson just to emphasize his authority.

This was an all-hands trip. I think we did Quatro a couple years in a row at this point. The Gibson BMW cactus planer, driving THROUGH a cow carcass was one year before or after this.

This group included the rarely seen Dahill, Jagger and Gibson, along with the usual suspects. Another treat we all enjoyed back in the day was Bob’s long hair. It was one of those things that was supposed to be cool, but deep inside, we all knew something was wrong. BUT, he had an awesome truck, paid for gas and wore a black jacket, so we let it slide.

This was the year of the Yucca song, kicking prickly bushes, ditching Gibson in the dark and hangin’ in Lance Carson’s boat on the bluff.

Learn More Get Merch Get Connected