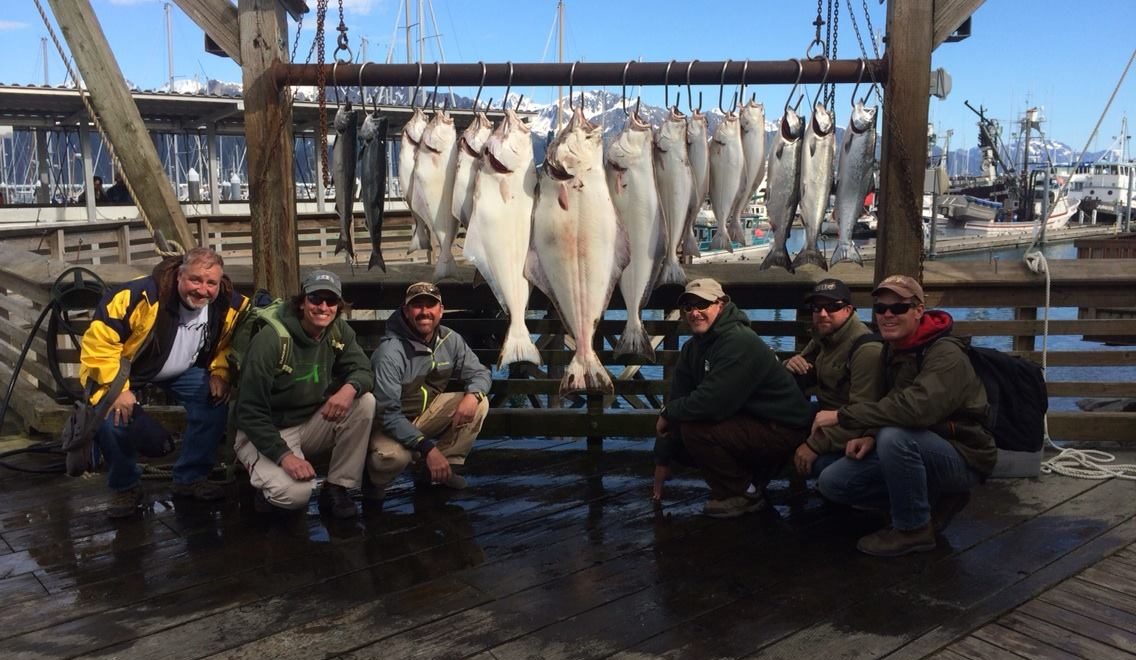 My original Alaska plan in 2014 was to surf and fish from a boat.  Multiple charters work out of Seward giving surfers the opportunity to fish, hunt and surf pristine locations. Although cold, I thought it would be a winning ticket for my friends. While it would be an adventure like no other the boat only had a max capacity of six. Since our party soon exceeded six that year the fish/surf trip was repurposed to a fish only trip. Not a bad gig either way because our fish only trip did not disappoint and as always, made for a memorable adventure for the crew that included, Olson, Wyatt, Sede, Jof, Ian, Steve, and Adam.

It all began when we arrived at the home we rented and walked in… it was a hunters paradise and just steps from the Kenai River. A taxidermist paradise with walls and shelves adorned with creatures with glass eyeballs. I recall a large cougar, deer, ram, salmon and various African big game mounts hanging on the walls … eerily watching us all daily … a continual reminder just how wild Alaska could be. The size of the salmon on the wall and a halibut tail was as big as a catchers mitt. This only heightened our excitement and ensured fishing would remain on top of the weeks agenda.

Before we fished, we warmed up with an extraordinary hike with phenomenal views. The ruggedness delivered a beauty we city slickers aren’t accustomed to. One afternoon we went hiking along the Harding glacier. It was a fairly easy hike from the trailhead to the top and led us to a beautiful vista. The path follows through the trees and up alongside the glacier until you rise far above it. The panoramic scenery at the top is outstanding, with mountains on one side, the glacier below, and the ocean on the other.  The hike was not a strenuous workout but something I’d call a vacation hike. On the way back we passed some other hikers who warned of a bear on the trail. For those of us who aren’t accustomed to bears those words give new meaning to heightened senses. We saw that bear in the distance, and decided to add more distance between us and the hungry bear during our descent down the mountain.

What trip to Alaska goes without some Salmon fishing? When your group is in a home on the Kenai river and has not a clue how to fish it properly it’s time for a guide. Robert set us up. He booked us a guided trip with 3 boats to fish up the river from our home. It was interesting to say the least, because fishing was not what we had expected. We trolled and stopped a few times on our way up the river and caught some beautiful rainbow trout; which by the way, shamed most of what we catch in our beloved Sierras of California. Soon into the trip, our little armada of 3 boats pulled to shore. What? We rented boats to go to shore?  We learned that in Alaska you may not need a boat and our guides didn’t tell us their plan to beach us and teach us how to fish for Sockeye. Evidently Sockeye salmon eat krill and plankton which makes them not so aggressive. The guides had us casting hooks … that’s right, hooks … maybe a little weight and some colored yarn tied on to them, but just hooks. There we were, all nine of us lined up on the shore casting and retrieving, each of us hoping we’d be the lucky one to pull the lines through their mouths and hook them. We actually hooked quite a few of one of the best tasting salmon out there using this method but the adventure ended as quickly as the day had begun.

The ocean fishing was next and it turned out awesome. Finding a new boat in a new town at some gawd awful early morning hour only helped build up the excitement. The combination of the beauty of high cliffs and rocks surrounding the channel out of the Seward harbor along with the anticipation of catching large fish was enough to make all the guys excited. The captain, Will, I believe grew up in Wyoming but made Alaska his new home after visiting as a young man. I’m not sure of this fact but after being here I can only imagine the appeal Alaska must have had lureing him in. He was energetic, young, and obviously driven to perform. He was an outstanding guide and captain who we later discovered helped us get more halibut and salmon on the boat that day than any of the other boats at J-dock. In fact anyone reading this who is planning to fish in Seward should look up “Captain Will”. We’ve been back over the years to fish with him. It’s unlikely you would be disappointed. As to the fish? … they were ginormous. Halibut, salmon and lingcod were the catch and all large by my standards.  At one point on the boat trip my friend Steven and I both hooked up to separate halibut. Steves fish hooked on a big white jig and mine on a large chunk of cut-bait. After some time, I felt Steve’s fish wrapping on my fish and I knew things wouldn’t go well. (To the non fisherman out there, crossing lines usually ends in someone’s line breaking but this time things went a little different.)  Steve lost his fish while the two fish fluttered against each other below, but while reeling in his jig up against my line he hooked into MY fish and cut MY line!  Oh the humility. The balance of the trip he’d proudly argue it was his catch while I would announce he stole my 75 lb. halibut.  Steve is a wonderful giving person who really didn’t give a rip who caught what, so in the end there is no one I’d have rather shared that fish with than Steve.

On many of these annual trips we are never sure who will go. After all it takes money, time and the decision to break the headlock life has on us before we commit to a spot on a trip. Vacations take planning and planning requires headcount. This year we had a few surprise attendees on the headcount. Adam, Neumann and the fish stealing Steven as I recall. Everyone brings something special to the trips but I’ll reflect a little here on Steven. Steven is the younger brother of my lifelong buddy Jof. As the younger brother Steve was always doing something different because … well … he had his own friends. Our friendship was a byproduct of my friendship with his older brother, the bond Steve and I created over the years was primarily built by me tagging along on their family events or crossing paths in his home. I always felt a connection with him. I was in his wedding after all. Steve committed to this years Alaska trip hardly knowing anyone and for me, this showcases exactly why TGT is so important. I hadn’t seen Steve in maybe 20 years and if not for these trips it could have been another 20. We all have different perspectives on life but staying connected is one of the most important.